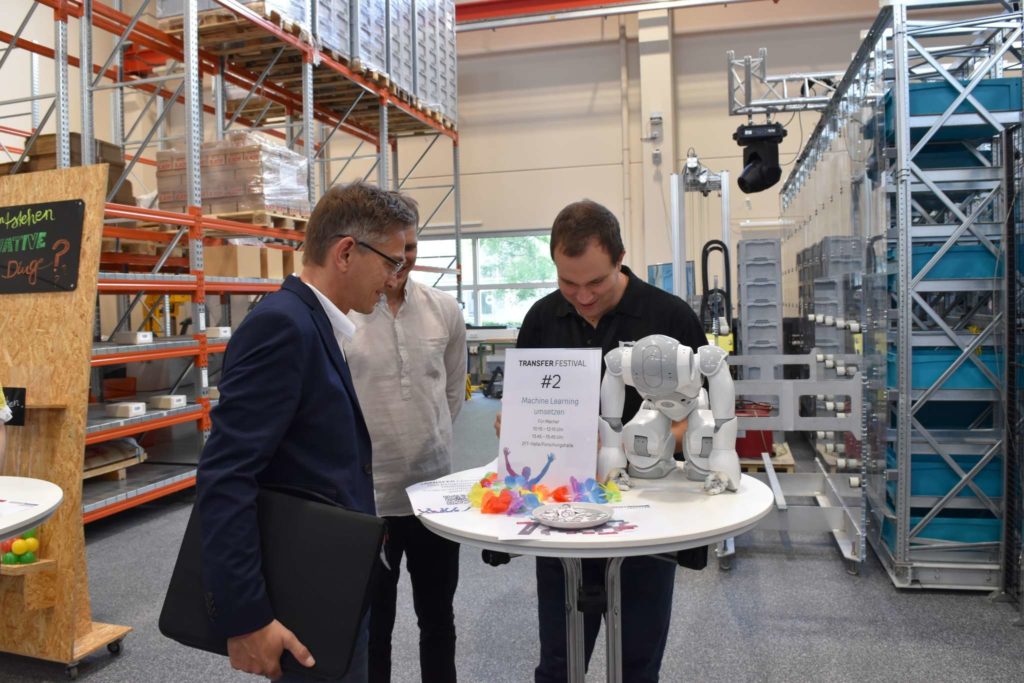 Festivals are usually known from the area of high culture or pop culture. With the TRANSFER.FESTIVAL the Digital Hub Logistics has now transferred the format into the world of science and celebrated an extremely successful premiere. Expectations were high: “We are fully booked at our first ever TRANSFER.FESTIVAL”, Hub Manager Maria Beck was pleased to say in her welcoming speech at the application centre of the innovation laboratory “Hybride Dienstleistungen in der Logistik” at the Fraunhofer IML in Dortmund. Around 100 representatives from science and industry, from logistics and production (but also from related sectors), from trainees and students to managing directors and university lecturers, were curious to see how a transfer event will proceed that relies entirely on workshops and (to a large extent) avoids lectures.
Just as music fans at festivals usually decide for a band or a stage, the participants of the TRANSFER.FESTIVALS could spontaneously register for various workshops – one in the morning, one in the afternoon. Their topics were inspired by the work of the main logistics initiatives in Dortmund, which took part in the congress with their expertise and know-how. These included the “Innovationslabor Hybride Dienstleistungen in der Logistik”, “Leistungszentrum Logistik und IT”, “Digital in NRW”, the “Graduate School of Logistics”, the “International Data Spaces Association” and “ML2R – Das Kompetenzzentrum Maschinelles Lernen Rhein-Ruhr”.
The workshops gave participants the opportunity to dive into the world of digital innovation: This included trying out smart devices as well as building an IoT button. In addition, some workshops focused on: How can managers find the right business model for industry 4.0? How can machine learning be implemented? What is the best way to pack your holiday luggage – of course in a context where digital assistants can already make it easier for people to pack pallets, parcels and boxes today? The workshop “Bring your problem” showed that a so-called “Digital Innovation Board” can be used to develop creative ideas for a concrete challenge of a company in just 45 minutes. Kerstin Herdtle, Manager Digital Innovation & Technology at META Regalbau, member of the Digital Hub Logistics, was pleased with a total of eight approaches to “refining the shelf”. All participants clearly liked the execution of the workshop.

Many visitors particularly praised the interdisciplinary approach of the TRANSFER.FESTIVAL: Transfer events usually come with a great amount of specialist knowledge. The special added value of the Hub-Festival was that the workshops enabled new methods to be used to rethink innovation itself. This also has an important cultural component. But there is no question that the TRANSFER.FESTIVAL could not do without specialist knowledge. However, this was presented vividly: During guided tours through test halls and laboratories, for example, the participants were able to convince themselves of the efficiency of robots and drones.

Last program item was a debate as an interactive event format. Moderator Maximilian Doecke had set himself the goal of actively involving every participant in the debate on the topic of “How is digitalization changing the world of work?” With his sympathetic and appreciative interview, the science journalist nevertheless succeeded in turning the participants into actors once again: With their experiences, assessments and opinions, they actively shaped the debate – even if, or especially because, not everyone became warm with the placatively formulated theses.

After the debate the festival atmosphere came up again: The Digital Hub Logistics had two Food Trucks on board, as well as live music to accompany the rest of the evening. 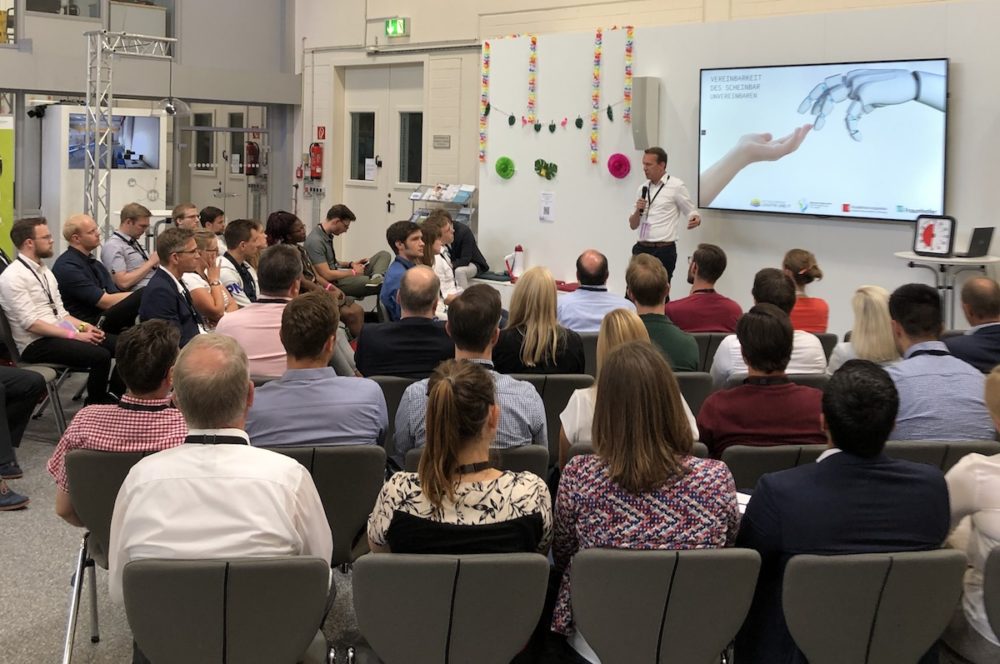