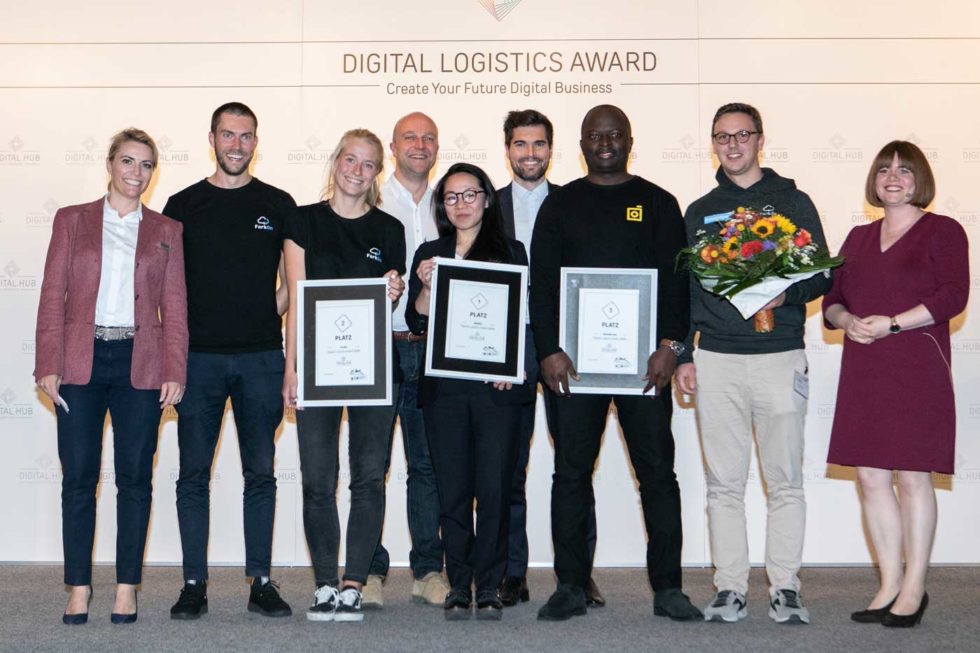 Eight competent and sympathetic founders and idea providers of tomorrow’s logistics pitched on 17th September on the stage of the “Zukunftskongress Logistik – 37. Dortmunder Gespräche” in the Congress Center Dortmund – and only a few hours later, three of them were pleased to win the Digital Logistics Award 2019 at the evening event. The participants of the congress had chosen the Hamburg start-up NÜWIEL with its intelligent bicycle trailer for the Last Mile Logistics on place 1. The company ForkOn from Haltern am See with its software solution for the management of forklift truck fleets was happy about second place. 3rd place went to the start-up company asurveyor.com from Cape Town, which is currently being founded and which has developed an app for quality control of fruit and vegetables across the entire supply chain. “Logistics depends on innovations like these: platforms, products or hybrid services,” said Maria Beck from the Digital Hub Logistics, who launched the award three years ago, congratulating all the winners and participants. “Each team made very good use of the opportunity to present its solutions to a large and also very critical specialist audience. Respect!”

What drives the winners; how the award can help them; how they invest their prize money…

NÜWIEL: A pilot project is on the wish list

The electrically powered NÜWIEL bicycle trailer was originally developed for transporting children. But the technology increased the price: the vehicle simply became too expensive for private individuals. The founders changed the market – and the trailer attracted the interest of last mile logistics companies. UPS, IKEA and Airbus are on the list of pilot projects that NÜWIEL is already successfully carrying out. “Our product is often underestimated, because at first glance it doesn’t seem very innovative,” smiles co-founder Natalia Tomiyama, who pitched impressively at the Future Congress. “But the trailer contains a lot of intelligence, i.e. sensor technology and software – and that always convinces the companies. The participants of the Future Congress also honoured the idea and the presentation. The founders want to invest the prize money in the further development of the product. Natalia Tomiyama: “I could well imagine that we could use the money to realize an unusual pilot with a small company that has no resources of its own – be it a craftsman or a health food store”.

Under the Hashtag #staplerliebe (#forklove in English) the ForkOn team from Haltern am See took part in the Future Logistics Congress. Founder Tim Klauke worked for many years in an international intralogistics company before his start-up career and discovered his passion for forklifts. The solution, which has been on the market since March of this year, makes the management of forklift truck fleets simpler and more transparent. Manufacturer-independent software brings together, analyses and interprets all the data relating to a company’s forklift fleet. As a result, the average costs of forklift fleets can be reduced by 25 percent. The team had applied for the first time ever for a founder’s prize – and is now in second place. Priceless for the founders: the many contacts they were able to make by participating in the competition and presenting at the Future Congress. Tim Klauke: “Our system lives through openness – and the Digital Hub Logistics has given us the opportunity to integrate new partners into this system with its award”. The prize money will be invested in growth, combined with the hope of winning new customers in the core market of the Ruhr area and starting new projects with the Fraunhofer Institutes in Dortmund.”

asurveyor.com: From mock-up to marketability

With the start-up company asurveyor.com from Cape Town, an “old friend” has taken the third place: Kingsly Kwalar, who pitched on stage, was there last year already with another innovation. This year he presented his app for improved quality control of fruit and vegetables across the supply chain. The South African wants to use it to declare war on food waste – after all, $138 billion worth of food is thrown away worldwide every year, 14 percent of it is damaged in transit in such a way that it is disposed of. On the other hand, he wants to help small and medium-sized farmers from South Africa in particular to provide customers and insurance companies with proof of the initial quality of the products. The blockchain-safe solution also provides automated status reports from remote areas. The fact that Kingsly Kwalar was behind the application was only revealed to the Digital Hub Logistics team after the finalists had been selected. Kingsly Kwalar had kept his name out of the video and pitch deck. The surprise was big when the hub team then sent the invitations to the Future Congress and only then found out who was coming to Dortmund. The app will go online in February next year. So far it is only available as a mock-up. This is what asurveyor.com wants to bring to life with the prize money.